Liverpool blitzed through the English Big Six just as it dominated the Premiership in 2019-20, taking this elite division by a whopping six points over two-time defending champion Manchester City.

Along with all of that, City entered the season defending all four English domestic championships, an unprecedented achievement.

But the end of all this was signaled on Nov. 10, when the Citizens ventured to Liverpool and faced a rival on a collision course with the Premiership title. With it's 3-1 win, Liverpool was off. The Reds didn't lose at all in the Premiership until Feb. 29, by which time they had 26 wins and a draw.

When play resumed in June after the covid pause, Liverpool no longer was such a dominant force – four wins, a draw and two losses. One of those losses came at Manchester City. The Citizens already had a strong hold on second place. But it wasn't as good as the hold Liverpool had on first.

At the bottom of the Big Six, Everton and West Ham are going down. Everton finished 12th in the Premiership and West Ham 16th. 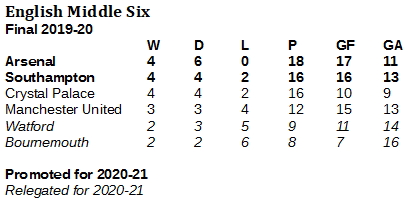 The teams coming up will be Arsenal and Southampton, which took second place with a total goals tiebreaker over Crystal Palace. Arsenal turned in a peculiar performance even for a Middle Six winner, winning only four of its 10 games. But the Gunners didn't lose any, and that does come to matter. As these standings show, Southampton and Crystal Palace each lost two games that Arsenal didn't.

It does seem odd, finding Manchester United lingering in the Middle Six, especially when they came up third in the Premiership standings. Against this Middle Six, though, United won only two home games and one road game. The two United beat at home, Bournemouth and Watford, also are the two teams being demoted to the Third Division. United lost to both of them on the road.

Watford and Bournemouth had both just been promoted to the middle, and now they're headed back to the bottom. 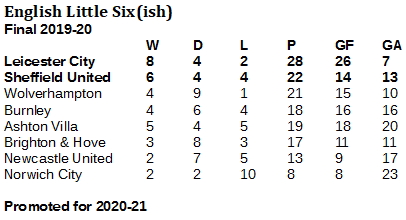 Leicester City, which had just been demoted to the bottom, will return the middle after a dominant Little Six(ish) performance in which it lost only two of 14 games.

The other promotion goes to Sheffield United, which had just rejoined the Premiership as the second-place team in the 2018-19 Championship and produced a fine Little Six(ish) runner-up performance. Norwich City, which won the 2018-19 Championship, flopped in the Premiership, finishing on the bottom of the league ladder and the Little Six(ish) standings.