The final day of the pro basketball season arrived with a three-way tie on top of the Super League. The tie was broken on the final day in quite a surprising way. 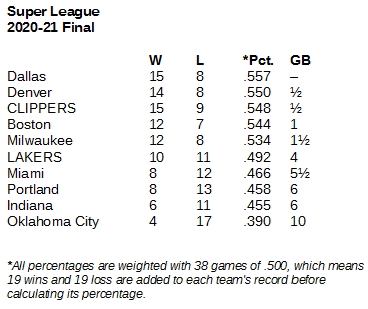 The Super League race across pro basketball in 2020-21 proved to be the most exciting in history, which is saying nothing because this is only the second time we're run it. Terrific race, though, by any standard.
When May began, the Boston Celtics held the upper hand at 12-4, but their lead was tenuous, just one-half game ahead of the Clippers (14-7) and the Denver Nuggets (13-6) and one game ahead of the Dallas Mavericks (14-8).
When the season ended barely more than two weeks later, the entire top four had been turned upside-down, and that's because when it was time to win the championship, three of the top four couldn't hang with three of the bottom four.
First, the Celtics collapsed. Losing to the Portland Trail Blazers, 129-119, at home on May 2 was a set-back, but losing a back-to-back at home against the Miami Heat on May 9 and 11 was a back-breaker. Like that, the Celtics went from the top to all the way out of it at 12-7 and their Super League season was done.
The Mavericks had only one game left and handled it, thrashing the Heat 127-113 in Miami on May 4. The Mavs were in the clubhouse at 15-8.
The Nuggets momentarily moved into a first-play with the Celtics by beating the Clippers, 110-104, at Staples Center on May 1, but fell right back with a 93-89 loss to the Lakers two nights later in the same venue. Three nights after that, the Clippers bounced back with a 118-94 win against the Lakers at Staples Center.
When we came to May 16, the final day of the season, we had a three-way tie for first place between the Mavs (15-8), Denver (14-7) and the Clippers (15-8). But the Nuggets and Clippers each had a chance to win it on the final day of the season. Oklahoma City, a miserable 3-17 in the Super League, was to visit the Clippers on Pico Boulevard. The Nuggets were visiting Portland, another second-division team in the Super League.
If the Clippers and Nuggets both won, they would finish tied on top in the games column (though Denver would barely prevail by percentage). The tiebreaker belonged to Denver, winning two-of-three during the year from the Clippers, so Denver would have won the title. However, if Denver lost and the Clippers won, then the Clippers would have won the title.
As the standings reveal, neither of those things happened. The Nuggets got drenched, 132-116 in Portland (In the NBA standings, the Blazers desperately needed the win for a playoff berth). The Clippers, already secure in the playoffs, fell to the Thunder, 117-112. Overall, it was only OKC's second win since March 31; they were 2-23 after that.
So, the Mavericks prevailed, clinching a berth in the 2021-22 Super League, though they also have qualified on a couple of other ways. And the moral of the story is that we see winners and losers when we look at standings, but in this league, don't you believe it. We're two years down in the basketball Super League and it has proved interesting.
The next Super League will have the Clippers, Nuggets, Mavericks and Milwaukee Bucks from the top half of this year's First Division. The top three teams from the Second Division going in will be the Philadelphia 76ers, the Utah Jazz and the Miami Heat. Entering from the Third Division will be the Lakers and the Brooklyn Nets. The Fourth Division champion New York Knicks also qualified, as did the Memphis Grizzlies for winning the intercontinental lineal championship.
One thing we can't say about the basketball Super League is that it's static. When we open the new season for 2021-22 with the third running of the Super League, the only teams participating for the third year will be Denver and Milwaukee.
Three other teams (Boston, Oklahoma City and Portland) participated in the first two Super Leagues and will miss the third. Ten other teams have been in one of the two Super Leagues, and four other teams will participate for the first time next season. Another 11 teams will be fighting through the pyramid for their first Super League berths next year.