What happens in Vegas stays there. But the Las Vegas Aces won the First Division in the women's pro basketball pyramid entirely in Bradenton, FL, where the WNBA was bubbled in 2020. 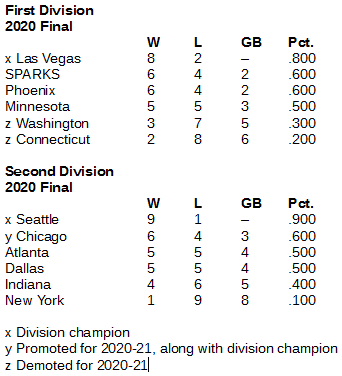 The Las Vegas Aces won the First Division in women's pro basketball for 2020, becoming the fifth team in five years of this history to win the distinction.

The Aces, relocated from San Antonio two years ago, won eight of ten games on this abbreviated slate, winning the top tier by two games over the Sparks and the Phoenix Mercury.

In the Second Division, the Seattle Storm turned in a strong year, winning nine of their 10 games and beating out the second-place Chicago Sky by three games. The Storm also won the lineal championship across women's pro basketball in 2020.

The Storm won the First Division in 2018, when they also surged through the playoffs for the WNBA championship.