Former Clippers guard Austin Rivers played an interesting role in the game that clinched the First Division pro basketball championship for the Denver Nuggets. Down the pyramid, the Lakers won the Third Division, their second straight pyramid title. 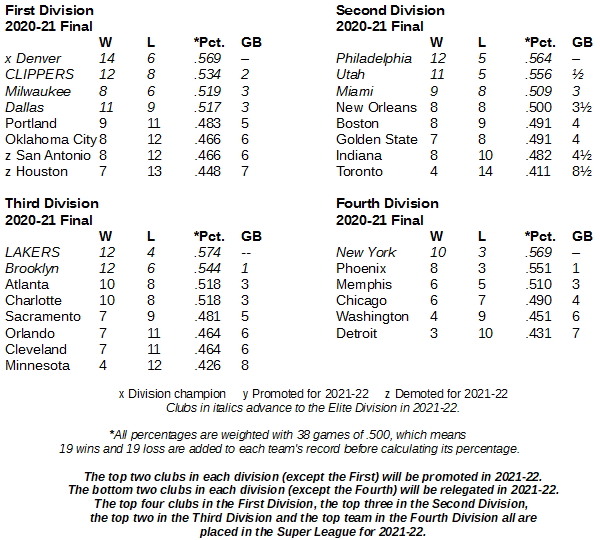 The First Division championship in pro basketball for 2020-21 was to be decided when the Denver Nuggets went to the Staples Center on May 1. Supplying the local opposition were the Clippers, who fiercely debated the evening's visitors for the top division title.

In a bit of a cruel twist for the Clippers, the man of the night, in a puzzling sense, was their old shooting guard, now wearing the clothes of a beggar, Austin Rivers.

Rivers, it's well known, is the son of Doc Rivers, and he was the kid everyone had to have coming out of high school in Winter Park, FL, in 2011, just 10 years ago. He selected Duke, where he hit a big three-pointer to beat North Carolina. A year later, he entered the NBA draft, taken by the New Orleans Pelicans with the No. 10 overall selection (The top pick that year, Anthony Davis of Kentucky, also went to New Orleans.).

Little injuries have followed Rivers around since then. A career shooting percentage of .418 that doesn't hang with NBA shooting guards has made him mostly a second-string player. Three years after drafting Rivers, the Pelicans packed him off to the Boston Celtics in a three-team deal. Three days later, Rivers went to the Clippers in another three-team deal.

Now playing for his father, Rivers began to receive serious playing time, getting up over 33 minutes per game in 2017-18. But his weak shooting continued, and so did the persistent injuries. He averaged 15.1 points per game to go with averages of four assists and 2.4 rebounds.

Not terrific numbers, but, at this point, the Clippers had a 25-year-old player who might be figuring it out and he was, after all, the son of the head coach. So, they traded him, straight up, to Washington for Marcin Gortat, who was 10 years older and proved to have so little value that the Clippers released him before the end of the next season.

And long before the Clippers released Gortat, the Wizards traded Rivers to the Phoenix Suns, who immediately waived him.

Rivers caught on with the Houston Rockets, where he also caught on to the local penchant for three-point shooting and reached a new career-high scoring average of 17.3 in 2019-20. Now that Rivers had a little value again, he was again traded, this time along with three other guys to the New York Knickerbockers for Issuf Sanon, a Ukrainian guard who was drafted in 2018 by the Washington Wizards and has since then been traded twice for a total of three draft picks and four players without ever signing an NBA contract. This was last November, a month before the 2020-21 season began.

Before the end of March, the Knicks packed up Rivers in the third three-team deal of what has become a journeyman career. This one involved seven players and four draft picks, moving Rivers to the Oklahoma City Thunder. Three days later, the Thunder waived him.

Three weeks later, on April 20, Rivers signed a 10-day contract with the Nuggets. On March 30, he signed a contract for the rest of the season. Two days later, on May 1, the Nuggets were in Staples Center to play the Clippers with the First Division championship on the line.

The box score for that night shows that Rivers played for 26 minutes. He took seven shots, three of them from three-point range, and he made one of them, a three-pointer. Otherwise, two defensive rebounds, four assists, a steal, a personal foul, three points.

He made two appearances, the first being the most important. Rivers entered the game with 6:12 remaining in the first quarter and the Clippers leading, 18-7. When Rivers returned to the bench with 5:39 left in the second quarter, the Nuggets were ahead, 44-36. That's a 37-19 run for the Nuggets in 11:51. The points were scored by Michael Porter, Jr. (10), JaMychal Green (nine) and Paul Millsaps (eight).

Rivers during that 11:51 kicked in two missed shots (one was a three), two defensive rebounds, two assists, a steal and a shooting foul. No points. But at the end of the night, his plus-minus was plus-22, by far the best of any player in the game. This seems to tell us absolutely nothing. But it also makes us wonder what Rivers must have done to be plus-22 with so little in his box score line.

Surely, he wasn't an innocent bystander. He played another 14 minutes, these without any change in the score margin. Strange things can happen during that period in the NBA game when the subs come in, but when a sub comes in for 12 minutes and your team swings the game 19 points in its favor, he must have something to do with it.

Anyway, the Nuggets won, 110-104, capturing the First Division. The Clippers dropped their final two games at the end of the season and formally finished two games back.

These were the First Division standings after games of March 3:

Obviously, quite a lot changed during the second half of the season. The Nuggets won seven of their next eight games to clinch on May 1. The Clippers were always a step behind the Nuggets and stayed there, but they did move ahead of Milwaukee, which couldn't break even in the second half, and San Antonio, which lost nine of its last 11 First Division games.

Of course, the Bucks won the NBA championship, so it's not like their season was a total loss. And the Mavericks, who finished in the top half of the First Division, won the Super League. But neither was much in the hunt for the First Division title by the middle of April.

The Rockets didn't collapse quite as badly as San Antonio, at least not in the First Division. Overall, the Rockets lost 45 of their last 51 games, so losing only seven of ten in the top tier isn't so bad. But it still landed them in last place at the end, as they didn't start their skid in a first-place tie like the Spurs.

The two teams on the bottom of the March 3 standings, the Oklahoma City Thunder and the Portland Trail Blazers, each finished gloriously to avoid relegation. The Thunder won four of their last six, starting with a March 4 win against San Antonio that secured the tiebreaker against the Spurs, and ending with a win against the Clippers on the last day of the season to force that tie and beat the Spurs in a relegation decision.

The Trail Blazers, apparently doomed on May 7, had one foot in the Second Division with a 6-11 record at the top level. But the Blazers beat the Spurs on May 8, securing all the tiebreakers with the Spurs and Thunder. On May 10, they defeated the Rockets, clinching at least that tie and condemning the Rockets to relegation. They didn't even need to beat the new champions, the Nuggets, on the final day of the season to avoid relegation, but they did, anyway, and it did make a huge difference in the Super League.

The remainder of the division was a wild scramble simultaneously to snag the one remaining Super League berth in the Second Division and to avoid relegation to the Third Division.

Miami rallied with wins in its remaining three games, including a back-to-back with the Celtics, to finish 9-8 and snag third place to land in next year's Super League. Indiana also won its last two. However because Golden State won three of its remaining four, the Pacers were stuck in the relegation zone.

The Pacers and Heat were the two teams promoted this year to the Second Division, and the difference for each between a Super League bid and relegation back to the Third Division was razor thin. The Pacers won two out of three against the Heat, so it's a bit to ask for them to sweep three, but that would have spared them relegation and put them in the Super League.

The Pacers would have been 9-9, tied with New Orleans, and they held that tiebreaker, barely (two-game split, one-point differential for Indiana). The Heat would have been 8-9, with Golden State at 7-8. Miami would have beaten out Golden State, .49090 to .49056. We round to the ten-thousandths of a percentage point and if it comes up the same, we consider it a tie. Here, it goes to the Heat, .4909 to .4906, and Golden State would have been relegated.

The Third Division wasn't nearly so interesting or complicated. The Lakers and the Brooklyn Nets finished on top, in that order, the same order by which they had been  promoted from the Fourth Division. Both will go to the Second Division and the Elite League in 2021-22. The Lakers finished a game ahead of the Nets, who finished two games in front of the Atlanta Hawks and the Charlotte Hornets, who finished tied for third.

The bottom of the Third Division finds the Minnesota Timberwolves lonely and in last place. The Orlando Magic and Cleveland Cavaliers finished tied for sixth, which is a harmless place to be, but that means they also tied for seventh, which is the relegation zone. The head-to-head tiebreaker is clear: Orlando won all three meetings, leading by 19, 21 and 22 points entering the fourth quarters of those games. Cleveland is going down.

The two teams moving up from the Fourth Division are the champion New York Knicks (10-3) and the runner-up Phoenix Suns (8-3), who actually won their two meetings with the Knicks. The Suns' poison pill was an 0-3 start in the division with losses to Detroit, Washington and Memphis.

The Suns appeared headed to another dismal Fourth Division output, but they won their remaining eight games, including their final two against the Knicks, and took second place ahead of Memphis, which bolted to a 4-1 start. Entering April 26, the Suns and Grizzlies were tied for second at 6-3, but the Suns went on to beat the Knicks twice, while Memphis lost to the Knicks and Detroit.