The Euroleague declared no champions and no promotions after ending the 2019-20 season early because of coronavirus. However, enough games were completed to make reasonable promotions and demotions in our pyramid-within-the-pyramid. 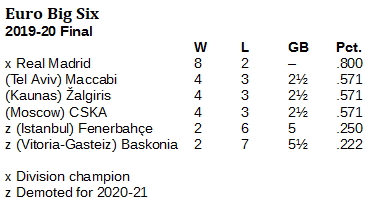 The Euroleague season in 2019-20 ended abruptly because of the coronavirus, lopping off the final six rounds of games and leaving the schedule finished at 28 games.

Similarly, at the bottom of the First Division, Baskonia already had clinched relegation and Fenerbahçe had all but clinched it when the lights went out. They both could have won every remaining game and Fenerbahçe would have tied somebody for fourth place only if Macabbi, CSKA or Zalgiris lost all three of its remaining games. Possible, but not likely enough wait on it under the circumstances. 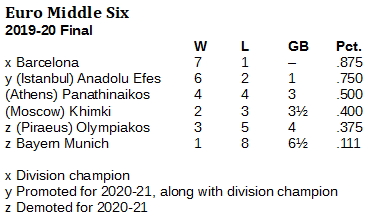 In the Middle Six, we see a clear top two with Barcelona (7-1) and Anadolu Efes (6-2) in line for promotion. If the schedule had played out, there was only one chance for a different outcome. Panathinaikos, the Athenian squad coached by Rick Pitino, was third place at 4-4 with games remaining against Efes and Khimki, the Muscovite rival of CSKA. Efes also had two remaining, being against at home against Panithainakos and at Khimki. With two Panathinaikos wins and two Efes loss, they would have tied for second at 6-4 and the Athenians would win the tiebreaker for beating Efes twice during the season.

So, we're looking at four games, and they all have to go the right way for Panithainakos to get into a tie. It requires Efes, which ended the year with the best league record at 24-4, to lose its remaining two games in the pyramid. Not likely. And Panithinaikos, 14-14 across the league, would have to win two. Possible. Panithainakos could have earned it on the floor, but there was no floor on which to earn it. So, we're going with what we have, promoting Barcelona and Efes.

On the bottom of the Middle Six, Bayern Munich is clearly to be relegated, and Olympiakos might have avoided it by winning the two it didn't play, but it would have depended on other teams collapsing. So, Olympiakos goes down with Bayern. 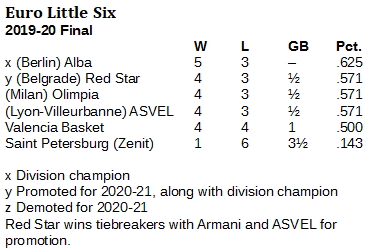 Obviously, the Little Six was wide open going to the Euroleague's final weeks in 2019-20. Only Zenit had no chance of earning promotion. Alba was the leader, but fifth-place Valencia was only a game away. One thing about the Little Six, though, is that we're not holding up the works over it, so although this division produced no outline of a resolution, we'll hold our nose and promote two.

Alba, the leader, is one. In second, we had a three-way tie between Red Star, Olimpia and ASVEL. Red Star (2-1) and ASVEL (2-1) survived the three-way head-to-head tiebreaker with Olimpia (0-2). Red Star and ASVEL split their two games during the season, with Red Star gaining the total points tiebreaker, 155-154. So, the second promotion here goes to Red Star, but we're so deep into tiebreakers that it's all but arbitrary.

One thing we don't have to worry about in 2020-21 is new teams being introduced to the Euroleague. Because of the coronavirus, domestic leagues were halted and those qualifiers couldn't be decided, anyway.