The Seattle Storm needed one good run of games in a shortened 2020 WNBA season to secure the lineal championship for the season. The Storm actually had two good runs and won all the way to the league championship. 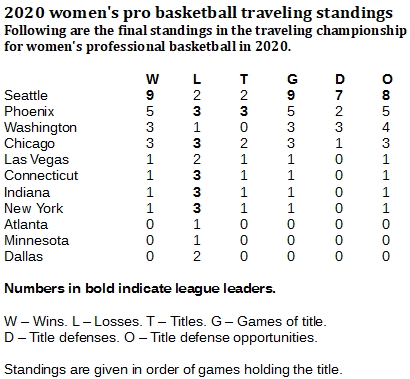 The Washington Mystics went thud across women's pro basketball in 2020, dropping to the bottom of the WNBA while snapping their streak of two straight years as the top team in their lineal championship.
The WNBA season in 2020, like every other season, was delayed and, like some other sports, bubbled. They ended up playing the whole season at IMG Academy in Bradenton, FL.
It turned out to be rather a banner year for the Seattle Storm, which won the WNBA championship and, for no small good measure, also won the pro women's basketball lineal and the Second Division on these pages.
In the lineal, the Storm won on its second try, beating the Phoenix Mercury, 74-68, on Aug. 8. The Storm made five successful defenses before losing the championship to the Indiana Fever, 90-84, on Aug. 20.
By then, the Storm held the championship for six games, Washington had three and the season was half over. Phoenix made a run with a three-game championship in September, bringing the Mercury up to four games. The Connecticut Sun put an end to that with an 85-70 win on Sept. 7, but the Mercury came right back and beat the Sun, 100-95, in overtime, to win the title back on Sept. 9.
Wouldn't you know, we came to the final game of the regular season, Phoenix held the title and five games of credit, and its final opponent was Seattle, which entered the game leading the league with six games of title. A Phoenix win would have much changed these standings, but, instead, the Storm stomped the Mercury, 83-60, taking the championship into the playoffs.
Again, we count each round of the WNBA playoffs as one game, as the playoffs are short and the team that wins the last one survives however we count it. It was two playoff series, each of them a three-game sweep for Seattle, first against the Minnesota Lynx, then against the Las Vegas Aces.
Thus, Seattle ended 2020 with nine games of lineal championship, followed by Phoenix with five, then Washington and Chicago, each with three. 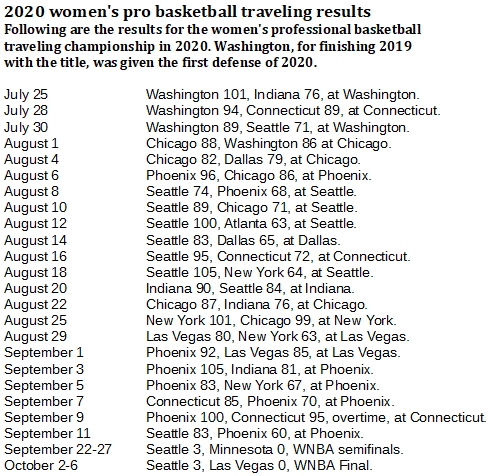