The French government ended the domestic soccer season without even postponing it first after coronavirus started coursing through the country in March 2020. So, however the standings were, that's how they ended. 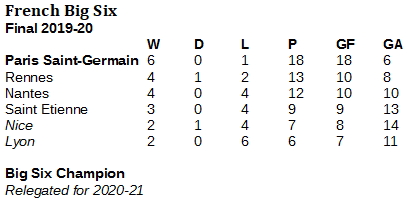 In France, the decision was made swiftly to end the 2019-20 pro soccer season once coronavirus began shutting down the country in March.
The French internal pyramid season had progressed pretty far, and the problems here aren't quite as difficult as those in Mexico, where the season ended at the same time. Most teams had played seven or eight of their ten games divisional games, enough to tell us what couldn't change, or probably wouldn't.
In the French Big Six, for example, Paris Saint-German had 18 points and Rennes had 13, and each had played seven games with three remaining. In the baseball vernacular, Paris Saint-Germain was waiting on a magic number of two with a combined six games remaining. Pretty good chance PSG was winning the Big Six. Ligue 1 declared no winners, but we're not Ligue 1, so we're declaring PSG the Big Six winner.
We can also live with demoting Nice and Lyon from the bottom. Lyon had played eight games, as many as any team in the Big Six, and still was in last place. Nice was two points behind fourth-place Saint Etienne after each had played seven games, so it's not like Nice is getting an entirely unfair shake.

In the Middle Six, also, for the number of games that were played, Marseille as champion and Monaco as runner-up is fair enough. Montpellier, in third place, can't complain that it didn't get as many games as Monaco. It can complain that it didn't get as many games Marseille. But if Montpellier had that game and won it, Marseille still would have been ahead.
On the bottom, Amiens and Lille are deserving relegates. Amiens put seven points in the standings with eight games. Lille had only six games, but so did the sixth-place team, Bordeaux, which survived. 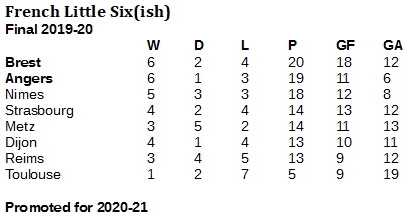 Good race in the French Little Six(ish). Would have been good to play it out. The teams being promoted are Brest and Angers. Brest played more games (12) than Angers (10) or the third-place team, Nimes (11).
But if we were to make some kind of adjustment for the interruption to the season, say determine standings by average number of standings points achieved per games played, the order would come up Angers (1.9), Brest (1.67) and Nimes (1.64). So, Brest and Angers would still be going up.
at August 22, 2021